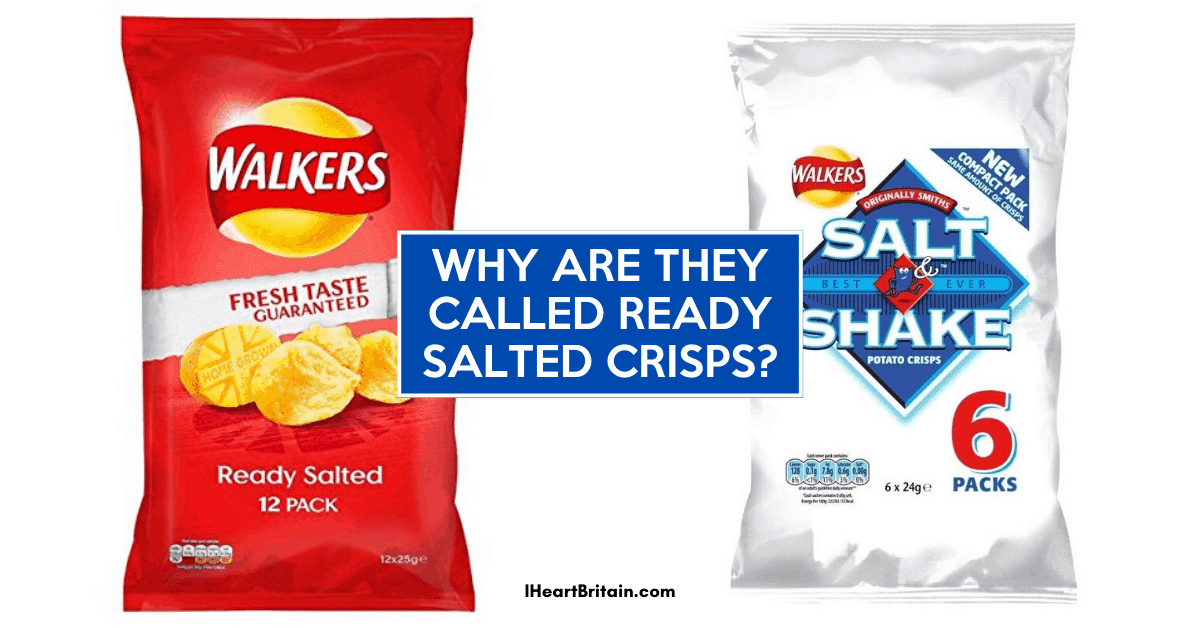 If you've travelled in the UK or watched a lot of British TV, you may have encountered “ready salted crisps” and wondered what they are, or how they got their name. Why do they bother to specify “ready salted”? Does anyone even sell unsalted crisps? Why don't they just call them plain, or original?

What are Ready Salted Crisps?

Ready salted crisps are what most Americans would call “original potato chips” or “classic potato chips”. They're just plain crisps with a bit of salt for flavour.

Walkers is easily one of the most popular varieties, but other brands include Golden Wonder, Seabrook, Ten Acre, and Kolak – along with a variety of own brand (aka “store brand”) ready salted crisps like Coop and Waitrose. The links above paragraph go to Amazon UK, but most listings have at least one seller willing to deliver to the US.

Why Are They Called Ready Salted Crisps?

Older Brits and expats will remember a time when crisps weren't salted by default. Instead, they came with a little blue packet of salt that you'd use to season the crisps to your desired level of saltiness (or skip the salt entirely). This was generally done by dumping in the amount of salt you like, then closing the packet of crisps and shaking it to distribute the salt evenly.

The wonderful thing about salt and shake crisps is that you can adjust the salt levels. Most crisps use far more salt than we should really be eating, and that's particularly problematic for some with health concerns. Of course, crisps are not a health food in any sense of the word – but a little less salt would make them slightly less unhealthy.

The not-so-wonderful thing about salt and shake crisps is that the salt doesn't always stick to the crisps, and it can be uneven – sort of like adding popcorn seasoning without a bit of butter first. A lot of the salt ends up in the bottom of the bag, and some crisps end up with less flavour. Some people like that, but it's clear most people have come to appreciate the convenience of the ready salted variety.

When most crisps are manufactured, they're fried and then salted soon after. When they're fresh out of the oil, salt and other seasonings stick to the chip nicely, and you don't have to worry about all the salt ending up at the bottom of the packet. It's a simpler, more consistent flavour and a lot of people prefer that.

Some examples of shows where you might have heard this include:

Curious About Other British Snacks?

You can read about other British snacks – cakes, biscuits, and crisps – here.

What is Salad Cream – & What Do You Do With It?

In some cases, we earn commissions from affiliate links in our posts. As an Amazon Associate, we earn from qualifying purchases. The Brits around here may be a bit mystified by this post, but bear […]

In some cases, we earn commissions from affiliate links in our posts. As an Amazon Associate, we earn from qualifying purchases.This is part one of a two-part post on the best British snacks. Today, we’ll […]

What’s a Cheese & Pickle Sandwich? An Intro to Branston Pickle…

In some cases, we earn commissions from affiliate links in our posts. As an Amazon Associate, we earn from qualifying purchases.Over on our British TV blog, one of the questions we get pretty regularly is, […]