British money has a lengthy history, so it's not surprising that it's evolved and changed over the years. Whether you're watching British TV, reading British books, or just planning a trip to the UK, it's understandable you might have questions about how it works. Even among Brits, you'll find many don't understand the older British monetary system – shillings and farthings and whatnot.

We'll start with the easy bit. In 1971, the British government converted the pound into a decimalised currency, which means it works very similarly to dollars and Euros. This did away with the shilling, and now it was all about pounds and pence (pennies). One pound sterling was declared equal to 100 pence.

Instead of the $ sign most of our readers are accustomed to, the pound's symbol is £, and its ISO code (like USD, CAD, AUD, etc) is GBP.

The pound sterling is the official currency of the UK, Jersey, Guernsey, the Isle of Man, Gibraltar, South Georgia and the Sandwich Islands, Tristan de Cunha, and the British Antarctic Territory.

As a member of the EU, they could have opted to use the Euro, but they decided not to. That means that if you're planning a trip that includes Ireland and the UK or the UK and mainland Europe, you'll need to give thought to both currencies. Granted, it's all much easier now that we have credit cards (many of which have no foreign transaction fees) – but for those situations where cash is essential, you'll need both.

Luckily for those who enjoy travelling to the UK, the pound sterling has been weak in recent years, dipping as low as $1.20 in August 2019. Dollars buy a lot more than they used to in the UK, so it's a great time to be travelling and shopping at British businesses.

The most popular slang term for British money is “quid”. A quid = £1, and there's no plural form to the word. You can have one quid, five quid, a million quid – but you don't have quids. “Smackers” could also mean £1, as in, “He wanted 500 smackers for his stereo system.”

Amounts in pence are often abbreviated as “p” (pronounced “pee”). For example, a public toilet might require 30p for access. If something requires pounds and pence, you could say 5 pounds 50 pence, but you're more likely to hear “5 pounds 50”.

There are 8 coins currently in circulation:

The image above will give you an idea what they look  like, but remember that designs can vary (there are quite a few collector's pieces in circulation) – and also keep in mind that the pound was redesigned in 2017, and the older design has been withdrawn from circulation. It was redesigned to reduce counterfeiting, as the Royal Mint estimated that a bit more than 3% of all pound coins in circulation were fake. The new design features a rose for England, a leek for Wales, a thistle for Scotland, and a shamrock for Northern Ireland.

You can see the new pound below:

The new British pound coin features a bimetallic design – making it much harder to counterfeit.

There are also some larger coins not in common circulation (but still legal tender):

There are four denominations of Bank of England notes currently in circulation:

Most people visiting the UK will deal primarily in the first three. At some smaller shops, you may find them reluctant to make change for a £20 note, so it's a good idea to keep smaller notes or coins on hand if you'll be in places that don't accept cards (though in this day and age, most places do).

The Bank of England will be issuing a new polymer £20 note in late February 2020, but the old notes will continue to work for now.

Is there a 1 pound banknote?

To many, this may seem like an “of course not” kind of question – but even today, there are some £1 banknotes still in production and circulation. The Royal Bank of Scotland issues them (even though pretty much everyone uses the coin), and they're also issued in Jersey, Guernsey, and the Isle of Man.

What About Scotland & Scottish Banknotes?

Much like the UK has always had a slight independent streak about the whole EU thing, Scotland has always had its own unique character that many have sought to preserve. For example, some Scots bristle a bit at being called “British”, no matter how technically accurate it may be.

Scottish banknotes are a funny thing because they're not issued by a central bank, and they're not technically legal tender ANYWHERE in the UK. Three retail banks (Bank of Scotland, Clydesdale Bank, and Royal Bank of Scotland) are permitted to print notes, and they're classified as promissory notes rather than legal tender. Go to the ATM of any of those banks, and you'll get their notes.

The designs on Scottish banknotes are all over the place, given that they're issued by three different banks. The denominations (and agreed-upon colours) are as follows:

Who or what is on a Scottish banknote? It depends on the bank and the year. Different banks have issued different series to commemorate various people and accomplishments, including Robert Burns, King Robert the Bruce, Charles Rennie Mackintosh, Nan Shepard, and Adam Smith.

Are Scottish banknotes accepted in England?

Scottish banknotes are generally accepted throughout the UK, but there are definitely some exceptions – especially with the older notes. Bank of England notes cease to be legal tender after a given date, but the Scottish banknotes are just slowly withdrawn from circulation as they come through the bank. The banks will honour them indefinitely, but retailers can choose not to.

If you go to an ATM in Scotland and find yourself with tons of Scottish banknotes before heading back down into England, don't worry or feel like you need to change them. The majority of businesses accept them without any trouble. 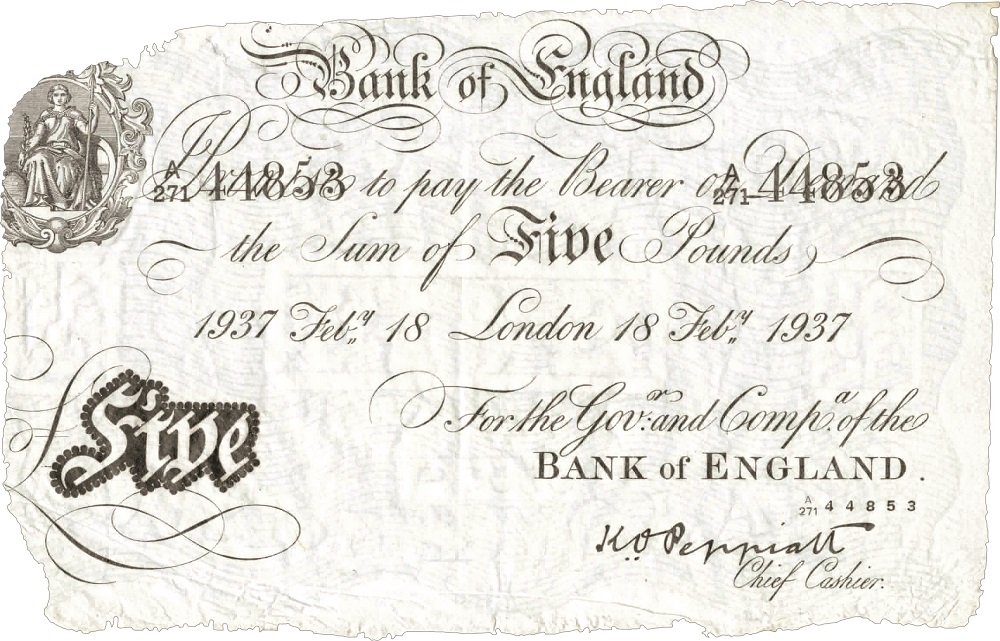 Of course, if you watch period dramas or read historical fiction, you're going to hear about entirely different types of money. Now, keep in mind that the UK has more than 1000 years of monetary history, to the point that it would take a book or two to properly cover it all. Instead, we'll focus on things you're likely to encounter in TV, movies, and literature.

Before decimalisation, British money was made up of pounds, shillings, and pence as follows:

Logically, it follows that you'd have 240 pence to a pound. The symbol for a penny was a “d” (for the Latin denarius), and for a shilling, it was “s” (the Latin solidus). The solidus and denarius were Roman coins, and of course the £ comes from libra. The Romans left more than roads 🙂

Historically, pounds came in either paper bills called notes or a quid, or gold coins called sovereigns. Granted, this was a pretty substantial sum of money, so it's not something an average person would be carrying around until the fairly recent past.

It would be pretty simple if it was just pounds, shillings, and pence, but that would be too easy.

Easy, right?? Why would they ever want to change something like that?

And what about guineas? You've probably heard someone talk about guineas at some point, and that's something a little different. A guinea was a gold coin worth 1 pound, 1 shilling. Often referred to as a “yellowboy”, they were typically used for more professional transactions (such as to pay a barrister or artist). That extra shilling made it somehow more gentlemanly.

One great example of guinea usage would be the auction scene in Series 1, Episode 4 of Cranford.

One more random old money thing – if you watched the British TV series Goodnight Sweetheart, you'll remember there were a lot of mentions of “white fivers”. They're a particularly interesting note because they were first issued in 1793 when they made the first £5 note. They remained in circulation with relatively few changes until 1956. Unlike modern fivers, they were printed on white paper with blank ink, roughly half the size of a modern A4 page.