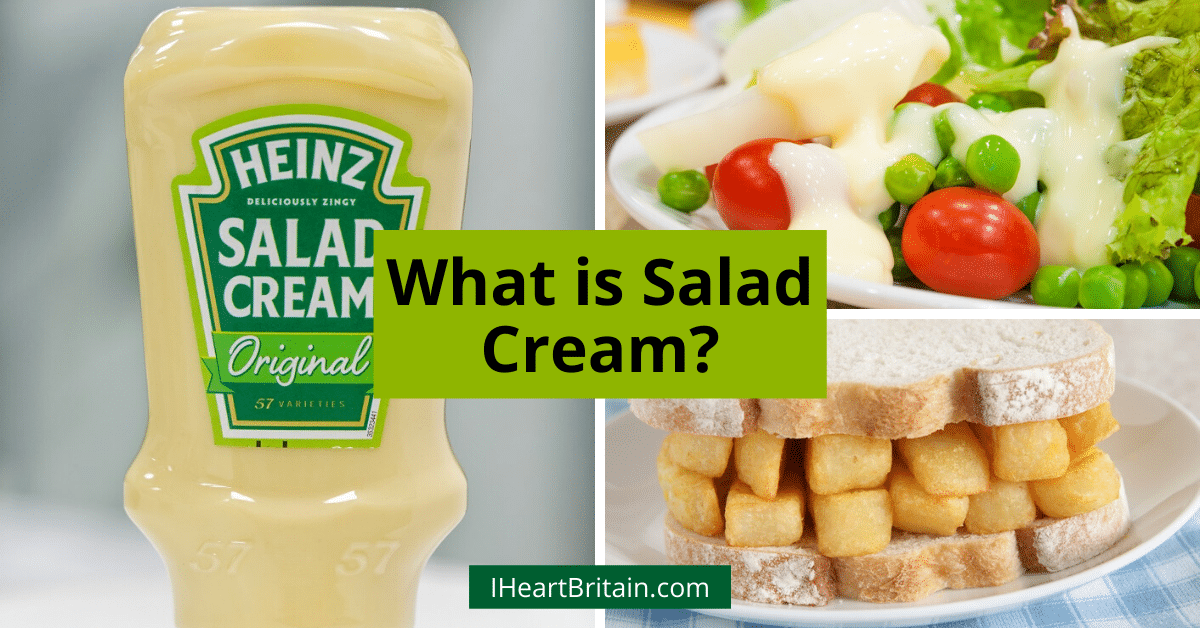 The Brits around here may be a bit mystified by this post, but bear with us because it's a topic that comes up from time to time in emails and our Facebook groups. If you've travelled in the UK or watched a lot of British television, you may have encountered a mysterious substance called “salad cream”. It sounds a bit like something you'd massage into your lettuce, but for the uninitiated, its purpose isn't entirely clear.

What is Salad Cream?

So let's start with the basics. Do you put salad cream on salad? Well, you definitely CAN put it on salads, but market research in the UK suggests that only around 14% of people actually do. It used to be considerably more common, but these days, salad-eaters have a lot more options – many of them healthier and more palatable.

So what DO people use salad cream for? It's actually quite versatile. In terms of what you put it on, it's very similar to ranch dressing for many Americans (not at all similar in taste, but we'll get to that). Salad cream is frequently used on sandwiches, similar to how you might use mayonnaise or another sandwich spread.

It's used so often on other things that Heinz briefly considered a re-brand as “sandwich cream”, which irritated a lot of traditionalists.

It's also worth noting that while Heinz is the most popular salad cream producer, they're not the only one. Other popular alternatives include Chef Salad Cream, Crosse & Blackwell, and a variety of own brand formulas (aka generic/store-brand).

Though it's most popular in the UK, it's also pretty easy to find in Canada and Australia. In the US, it's mostly limited to specialty stores and the odd British section of larger supermarkets.

While many Brits use salad cream in ways similar to how ranch dressing is used in the States, the flavours are not at all similar.

The ingredients for salad cream are pretty simple:

In terms of ingredients, it's fairly similar to mayonnaise or Miracle Whip, but the consistency is more like ranch dressing – and of course, it has a hint of mustard that gives it a bit of extra colour and flavour. It's also significantly less sweet than Miracle Whip. There really isn't a US equivalent I've ever encountered.

Where Can I Get Salad Cream in the US?

The easiest place to get salad cream in the US is on Amazon. They ship pretty much everywhere, and while it's more expensive than a bottle purchased in the store, most people won't be buying it often enough for it to be a huge deal.

If you have a British grocery store nearby, it's pretty likely they'll have salad cream. Most stock a pretty good selection of Heinz items, though salad cream isn't quite as common as Heinz beans.

A lot of non-Brits have encountered salad cream via British television. We've caught mentions of it in quite a few popular shows, and for the unfamiliar, it's a great look at how salad cream is viewed. It's not a high-class food by any means, and you'll find a fair bit of snobbery (and reverse snobbery) around the humble condiment.

Have You Tried Salad Cream?

Have you had the opportunity to try salad cream? Did you like it – and what's your favourite way to eat it? Let us know in the comments!

In some cases, we earn commissions from affiliate links in our posts. As an Amazon Associate, we earn from qualifying purchases.This is part one of a two-part post on the best British snacks. Today, we’ll […]

In some cases, we earn commissions from affiliate links in our posts. As an Amazon Associate, we earn from qualifying purchases. If you’ve travelled in the UK or watched a lot of British TV, you […]

What’s a Cheese & Pickle Sandwich? An Intro to Branston Pickle…

In some cases, we earn commissions from affiliate links in our posts. As an Amazon Associate, we earn from qualifying purchases.Over on our British TV blog, one of the questions we get pretty regularly is, […]